skip to main | skip to sidebar

, a photo by orangecomo on Flickr.
So for the first time since Paris Brest Paris 2007 the Orangecomo was packed up for a trip. I signed up for this trip with Adventure Cycling about 5 months ago thinking I would cycle through the winter and this would be a breeze. With a frozen shoulder, bad weather a bout of bronchitis, lingering grief and storagelockeritis.   I did not get in any long rides before leaving on this trip. Muscle Memory is an awesome thing . . . This was a supported trip but we were discouraged from sagging.

I met up with the tour in Las Vegas - we vanned it to Parump where I assembled the OC - other then a missing spring from the skewer and somehow not packing my pump it was safe and sound since it had been inspected by TSA (they love to check out those coupled bikes).  We stayed overnight in Parump and cycled to death Valley on day two.

After we arrived at the Texas Spring Campground and set up tents, we headed down to the Furnace Creek Ranch and got a quick swim and shower in before dinner which was cooked by my fellow cyclists.  Little sleep that night was a wind storm swept through the valley and one of the campers did not have his tent fly pinned down it flapped like an aircraft engine all night.

In the morning we headed out for a different section of the park much further UP the park and at altitude.  This was a challenging climb - I found myself counting milepost markers while checking out the scenery until arriving for the turnoff for Mesquite Springs campground.  We took solar showers in the restrooms with one poor person getting too much of a view of one of the cyclists (the women set up in the handicapped bathroom) while the guys just had it hanging out there in the middle of the bathroom.  Though a bit cold during the night (thanks to wool socks and handwarmers I was comfortable).

On day four we had more climbing to do out of the campsite and then further up the road to tour Scotty's Castle - that place was an oddity in the desert and I was very glad to have the opportunity to see it.  Unfortunately doing the tour got us back riding to Furnace Creek (Texas Spring Campground) much later in the day and left us vulnerable to heat and headwinds my non riding ass gave out about 20 miles from the finish after having ridden about 50 miles so I called it a day and took a lift to the campground which allowed me to get back in time for a nice swim at the Furnace Creek Ranch.

Day 5 was a rest day or optional riding day.  I stuck with sight seeing and visited Dante's Viewpoint which gives you a fabulous view down the Valley and many of us did yoga up there with one rider showing us the dead bug or happy baby pose.  Some of the riders had their bikes loaded on the van and had a stupendous fast descent - with switchbacks comparable to Alpe D'Huez in France.  The rest of the day was spent in the pool and having a beer at the pub. My team was on dinner duty that night we made up some pretty tasty burritos and margarita's with thirst quenching limeade.

Day 6 found my team on breakfast duty so we got a late start after feeding the huddled hungry masses and making sure they had all packed their peanut butter and nuttella sandwiches.  The riding was beautiful with a stretch going through the Badwater section of Death Valley but alas after going to 250 feet below sea level we would go to over 3500 feet above sea level.  The 3500 foot climb became a bit too much in the heat and one of the other riders and I flagged down the van and got a lift up most of the climb just cutting off about 10 miles out of 75 mile day. Camping was at a small RV park that featured (yes another spring fed pool) so a not so quick swim was engaged in.  We dined out tonight in Shoshone NV - it was the day of the half billion dollar lotto and the restaurant was close to being out of food due lotto madness - they had been swamped all day.

Day 7 found us back on the road to Parump - a very challenging 27 miles (there had been an option of a longer route also but I believe we were all starting to get rubber legged)  we were still in a valley so much more climbing today.  I suffered from the worst case of hot foot I've ever had on this day (and it hung around for about 4 more days even off the bike - new shoes?  new insoles?  more peddling so my stroke is again round as a clock not square?) I was glad it was a shorter riding day. We shuttled back to Vegas where I said goodbye to the group and headed to a hotel on the strip to spend some time with a college friend and get some good eating in.  (Vegas has lots of the Top Chef restaurants)

Death Valley was gorgeous and I would love to ride their again in the future. The riding was challenging, traffic was low, the roads were good and best of all it was a great sunny getaway from Seattle in the spring with swimming to be had in a spring fed pool and no light pollution so you could see the Milky Way and all of the dippers.
Posted by Amy at 5:41 PM 3 comments:

Okay I'm registered and raising money now I just need to start riding my bike to get in shape for it. This year on my 44th Birthday I'll be doing a fundraising ride for the Fred Hutchinson Cancer Center Survivorship Program. We spent alot of time at Seattle Cancer Center Alliance which is part of the Fred Hutch connection. We are so lucky in Seattle to have access to some of the best cancer care in the world. I can't imagine having to add the stress of traveling to the mix of dealing with cancer or not being able to travel and not get the best care available. SCCA was busy with families going through this journey in life called Cancer - some got lucky and made it through but will carry the cancer experience with them always - others not so lucky and now have a big chunk missing out of their lives So motivate me to ride and get back in shape and donate to the cause.
Amy Harman Donation Page.
Posted by Amy at 2:56 PM 2 comments: 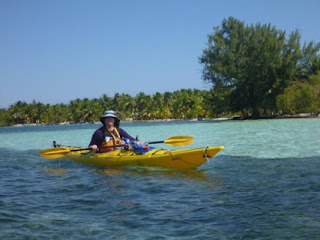 During the dark times in Seattle - I venture to warmer climates. In December I took my adventurous self to Belize. With no Bob to pack up the Klepper and to really go off the beaten path I had to settle for traveling with a group and I did pretty good. I booked my trip through Island Expeditions. My trip was their Paradise Islands package with the Maya add on. We spent most of our time on Tobacco Caye and South Water Caye. Both I liked but Tobacco Caye with the deck over the beach and the hamock with my name on it was a great place to sip rum punch, read a good book and just escape from work and the stresses of my daily life. 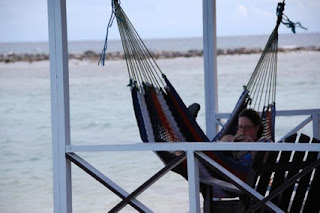 Retro-Rama Show
Originally uploaded by Frauenfelder
Was looking for information on some of the art I own and found this picture of Bob with one of the pieces. - Miss you Boo.
Posted by Amy at 4:30 PM No comments:

Motivating to get Back on the Bike

I have beautiful bicycles and haven't been riding any of them - and have been lacking motivation to get back out there. I've lost some fitness, gained a few lb's, and its Winter now in Seattle which also brings the motivation level down but then I come across a quote like this.

"Talking about bicycles," said my friend, "I have been through the four ages. I can remember a time in early childhood when a bicycle meant nothing to me: it was just part of the huge meaningless background of grown-up gadgets against which life went on. Then came a time when to have a bicycle, and to have learned to ride it, and to be at last spinning along on one's own, early in the morning, under trees, in and out of the shadows, was like entering Paradise. That apparently effortless and frictionless gliding--more like swimming than any other motion, but really most like the discovery of a fifth element--that seemed to have solved the secret of life. Now one would begin to be happy. But, of course, I soon reached the third period. Pedalling to and fro from school (it was one of those journeys that feel up-hill both ways) in all weathers, soon revealed the prose of cycling. The bicycle, itself, became to me what his oar is to a galley slave."

"But what was the fourth age?" I asked.

"I am in it now, or rather I am frequently in it. I have had to go back to cycling lately now that there's no car. And the jobs I use it for are often dull enough. But again and again the mere fact of riding brings back a delicious whiff of memory. I recover the feelings of the second age. What's more, I see how true they were--how philosophical, even. For it really is a remarkably pleasant motion. To be sure, it is not a recipe for happiness as I then thought. In that sense the second age was a mirage. But a mirage of something."

"I mean this. Whether there is, or whether there is not, in this world or in any other, the kind of happiness which one's first experiences of cycling seemed to promise, still, on any view, it is something to have had the idea of it. The value of the thing promised remains even if that particular promise was false--even if all possible promises of it are false."

Hopefully the New Year will bring me back to Stage 2 and the fever will return- It's hard to think I have lost that love also - I think it is only dorment.
Posted by Amy at 2:11 PM 1 comment:

Amy
I'd rather be on a bike tour, or paddling around a desert island in Baja in my Klepper Kayak but if I'm home you can find me reading Atomic Ranch magazine and planning a mid century modern life.